NEVADA, IA – The Republican Party of Story County announced today that Senator Tom Cotton of Arkansas will be the keynote speaker at the Annual Judge Joseph Story Dinner. The dinner will take place at the Cambridge City Center in Cambridge, Iowa on Thursday, July 7, 2022, with doors opening at 5:00 pm. 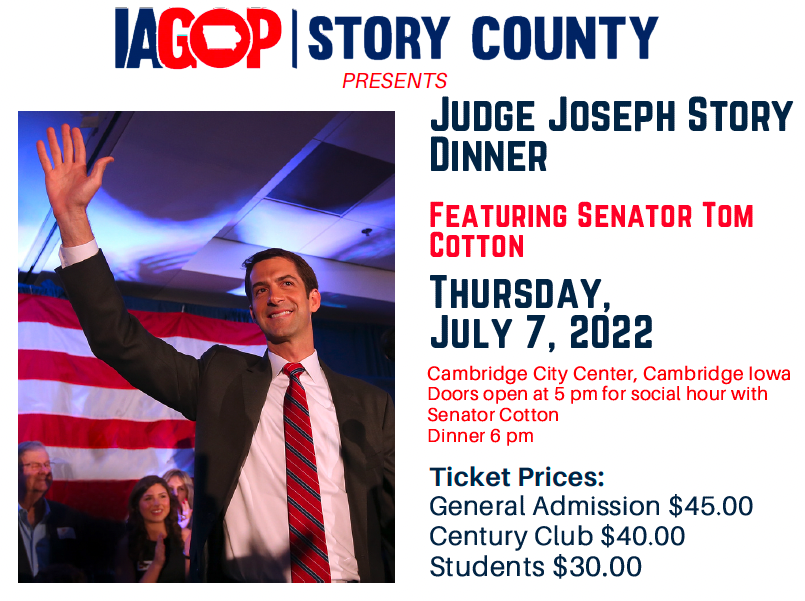 “We are excited to welcome Senator Cotton to Story County.” said Brett Barker, Story County GOP Chairman. “With national security issues again on the forefront, we are looking forward to hearing from veteran and US Senator, Tom Cotton.”

Tom Cotton is a United States Senator from Arkansas. Senator Cotton’s committees include the Judiciary Committee, where he serves as the Ranking Member for the Subcommittee on Criminal Justice and Counterterrorism, the Intelligence Committee, and the Armed Services Committee, where he serves as the Ranking Member of the Air Land Power Subcommittee. The Senator grew up on his family’s cattle farm in Yell County, Arkansas. He graduated from Dardanelle High School, Harvard, and Harvard Law School. After a clerkship with the U.S. Court of Appeals and private law practice, He left the law because of the September 11th attacks and served nearly five years on active duty in the United States Army as an Infantry Officer. Senator Cotton served in Iraq with the 101st Airborne and in Afghanistan with a Provincial Reconstruction Team. Between his two combat tours, he served with The Old Guard at Arlington National Cemetery. The Senator’s military decorations include the Bronze Star Medal, Combat Infantry Badge, and Ranger Tab.